This year, it’s not about packing. I already have what I need, most of it sitting in the storage bins of friends, family and even a couple of people I barely know but who were kind enough to help a girl out.

I know how to find center camp. I’ve made certain to bring extra lights; all of mine went dead last year. I’ve long since reserved a bike with my favorite place for bike rental.

This year, it’s about preparing mentally for that which cannot be prepared. That is the fun of Burning Man. You just never know what will happen next.

In 2009, my friend Gail shaved her head and left the hair in the temple before going back to begin chemotherapy. Second burn, Gail finished her final treatment of chemo the day I arrived in San Francisco. I showed up at her door with a care package of food, manicure and massage certificates, gifts from a group of us who know and love her. It was an honor to be the one to surprise her with the largest bunch of flowers I’ve ever seen. She didn’t go to the burn last year. 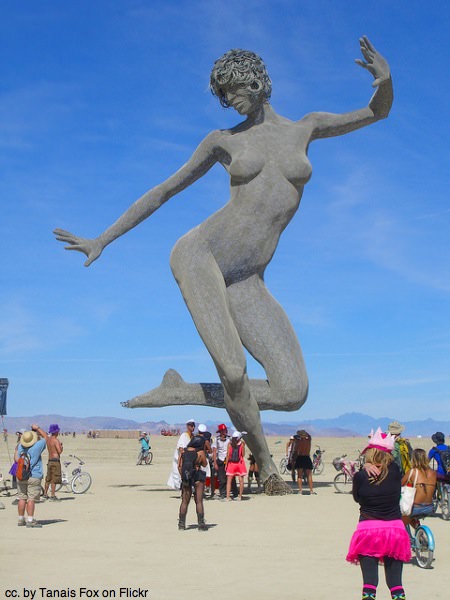 Last year, I sat in camping chairs in front of our truck with a beer in one hand and a Marlboro Red 100 in the other making jokes with Dave, the middle-aged homo, as he calls himself. We checked out groups of passing naked men, compared notes. We laughed a lot.
This year, Gail is going. Dave is not.

Last year, I arrived on the playa alone. No husband or daughter. Just me arriving to a camp of people I’d never met, and it was perfect. I could do what I wanted, be who I wanted, go where I wanted when I wanted. I was a blank slate. This year, I’m going with Noah and my best friend Jen who has known me longer than anyone.

Last year, I had no responsibilities. This year, I’ve volunteered to cook dinner for our camp, fifty or so people. I’ll be giving herbal medicine massage at a healing fair, and I’ll probably do at least one shift of man watch. That means, I’ll stand out by the man wearing an official Burning Man “Man” t-shirt and yell at you if you ride your bike too close or try to climb it or basically do any other shit that stupid drugged people sometimes do in the desert.

Last year, I wandered through the desert alone or with people I’d never met. There were random cuddle piles. There was confusion. My bike got stuck in deep playa just before a massive dust storm hit. I got lost after the man burned and all landmarks had been taken down, so I wandered from fire to fire keeping warm. Someone handed me a stick with a marshmallow on it to roast. I’ve added marshmallows to my packing list for this year. I walked near the night clubs with Julian and a guy who called himself Fire Fairy, when someone suddenly asked us if we wanted bacon cheese grits.

Sometimes you don’t know how badly you want something until it’s in your hands. Julian pulled out a pair of chopsticks from his bag and began eating. We all laughed. Later, in Reno, while Julian brushed my wet hair like he has done so many times for his sisters, we admitted to each other that we weren’t sure if Fire Fairy was interested in me or him. He seemed to want both of us. But that was last year, and I know if I want any hope of having as perfectly wonderful a time this year as I did last, I need to let go of any attachments or expectations.

It could suck. Noah and I could spend the week ignoring each other. Maybe I’ll suddenly see that the camp that last year was so welcoming and kind, was not at all what I thought. What if Jen and I, who in the twenty years we’ve been friends have never had a fight -– true story -– fight and leave the playa not friends. Odder things have been known to happen there.

Jen called last week. I’d sent her the two articles I wrote last year for Indie Travel Podcast to help her prepare and mentioned that she’s better off not reading more unless she wants to be overwhelmed.

She read anyway. She was overwhelmed. The lists are too long. The choices too varied. No one needs all of that. You only need make the choices that are right for you. You’ll probably make mistakes. So what? These are my plans for Burning Man this year. I will dance. I will dance again. I’ll find the Space Cowboys or maybe Bass Nectar and follow the music until the early morning hours when I’ll fall asleep somewhere and wake up only when the day gets too hot to sleep.

I will run across people I didn’t expect to meet. I will not see people I hoped to see. I will wear a tutu on Tutu Tuesday. I will make curry for 50. I will see amazing art. Something will be set on fire.

This year, I want to go to Glitter Camp and find my Burner soul mate at the Costco Soulmate Outlet.

I will visit the Man and the Temple at dawn at least once, most likely after a sleepless and wide-eyed night. I will probably fuck something up. I might have a breakdown. The heat and intensity does it to everyone eventually.

But as long as I don’t expect or think something will be in a certain way or shape or place, then it will be just as I want it to be. Kind of like the rest of life, except without the costumes, glitter and cheese grits.

Check out our Burning Man packing checklist and this article about how to prepare for Burning Man.

Leigh moves around a lot. She’s lived in five countries and spent last three years traveling with her husband Noah and daughter Lila. For now, she’s finding home in Salta, Argentina where she writes, teaches and is taking a deep breath before the next move. You can read more of her travel tips and writing on her blog The Future Is Red.

Your thoughts on "Burning Man: when you get past the glitter, it’s all about metaphor"